Essentially Umamido is a Japanese noodle bar. Our main focus will be on ramen noodles, delicious firm wheat based noodles served in a tasty broth. Please do not expect a menu with 100 items at our restaurant, we prefer to focus on one thing and doing it well. Umamido will serve you ramen noodles in a local context, using fresh organically grown local ingredients where possible. What is it that we stand for? Well, our name describes it best. Umamido is a combination of the Japanese word Umami, which is considered to be the fifth taste after the four traditional ones, generally translated as savory, and the suffix -Do, meaning “the way off” as in describing a form of art or lifestyle. As such, the same way chado stands for the way of tea, Umamido stands for the “way of the savory”. So yes, taste is what it is all about, cooking with beautiful products, served with integrity. Preparing the broth for our noodles soups takes for over ten hours which gives it intense flavor, richness and depth; tasty ramen noodles with a chewy texture give flair to your soup, and the lovely toppings such as crunchy vegetables and a couple of slices slow cooked pork belly will bring you to noodle heaven. Umamido is slow food, served fast. 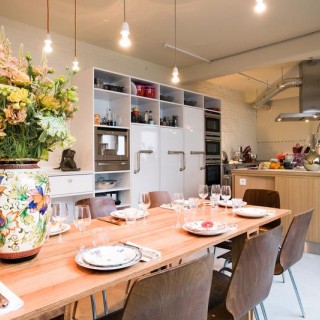